After some what of a heavy weekend filled with more bonding stories and much light hearted banter we start week two.

The first full week of lessons , where our students will start to be pushed more physically, but it’s usually in these early weeks where we see the most progression in their skiing and riding. 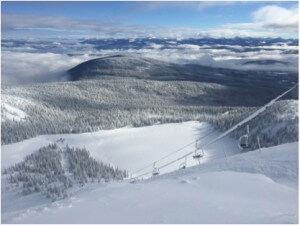 On Monday morning we sorted the groups out with their new instructors, Andy J &  Jeremie for the level ones and Mellen for the level 3’s in snowboarding and Darran & Brian for the skiers. All of which hold such great reputations within the ski school. We are always so lucky to get the best! 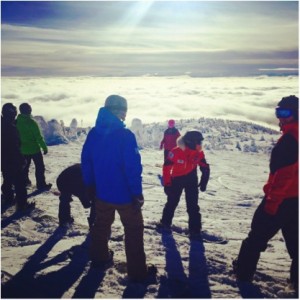 Yet again the snow was falling and the conditions are still insanely good! With 2 months and 4 days into the 2015/2016 season we have hit 500cm cumulative snowfall!

By Tuesday the level 3 boys were all exhausted having been put through their paces by Mellen! Although already being level 2 instructors and very competent riders the realisation that they had to now ride black graded terrain at full speed whilst being in full control has been daunting! However with the expertise of Mellen and their passion for snowboarding they are all adapting with huge smiles on their faces. Achieving G forces, strapped to a plank of wood, sliding down a mountain is the ultimate exhilarating adrenaline buzz!

This year NBS Ant and I had decided to hold a weekly “come dine with me” competition between the houses to enable us to bond and really get to know our students and also to be entertained and waited on a hand and foot! Today, Wednesday, was the first night and coincidently our own house hold was to be first in line to cook for us! However being our own house, they had already decided that they wouldn’t be allowed to win as there would be a bit of an uproar in the ranks…. So instead they decided to take us out and not feed us and hold more of a “come drink with me” type evening! Very entertaining indeed! 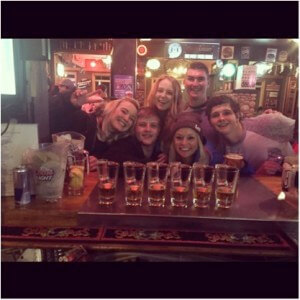 Thursday morning was a little hazy, never the less everyone was up and out the door ready to hit some fresh tracks and get stuck into some of their own first teaches! A few of the groups did some teaching down at Happy Valley , the nursery slopes , and the feedback from the instructors about our guys has been top notch! The confidence among the groups is glowing and their positive attitudes are just bouncing of each other!

Friday is a shorter day on the slopes as they finish lessons a little earlier to get lots of sit down individual feedback from all the instructors. They fill out their weekly guides and note down things to work on and techniques they’ve learnt. Following this we speak individually to the instructors too , just to make sure everyone is happy and up to standard. All positive on that note and judging be the vibe amongst all the students still…. Everyone is loving life! As are we watching everyone develop!

Saturday was a rest day for most, and we do encourage everyone to rest up as much as they can on the weekend. However with all the snow , especially on Saturday evening, I think most people were kitted up and ready first lifts Sunday morning! It’s great seeing all the little groups setting off and viewing all the epic footage from the days out on face book ! So nice to see everyone having such a laugh and practising new learned techniques. Bring on next week! 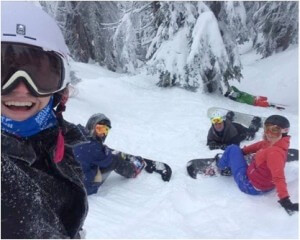